In the past few years, the state of Connecticut has undergone some bizarre weather and events: Since 2010, we have had an earthquake, a blizzard, a hurricane, a Frankenstorm, a freak October snowstorm, floods and a bunch of tornadoes. Heck, would anyone be surprised if we were hit with a swarm of locust at this point? Seriously, it seems as though it’s “The Storm of the Century” blows through every other week here. It almost feels like The End Times is constantly upon us.

Well, as dramatic and fear-inducing as all these recent storms have been, Connecticut is no stranger to epic natural events. One of the more unusual occurrences, however, was a happening known simply as “The Dark Day.”

On the morning of May 19, 1780, the sky grew so dark all over most of New England and parts of the Northeast that “everything bore the gloom and aspect of night,” according to Our First Century, (1876) by Richard Miller Devens. Residents needed candles to see by, the birds stopped singing and all of the world seemingly came to a stop.

Here’s an image of the event from the aformentioned Our First Century. 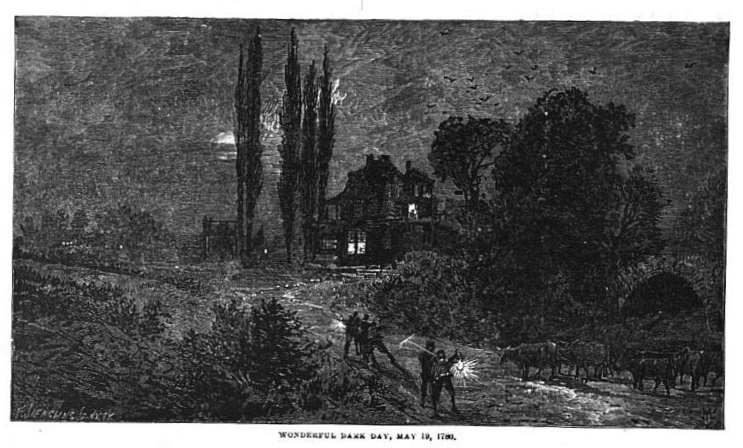 I love that it says, “Wonderful Dark Day.” All a matter of perspective, right?

The event was so widespread that even Gen. George Washington, busy fighting the revolution in New Jersey, made note of it in his diary.

Anyway, here in Connecticut, the darkness was so pervasive that business, farming and all manner of daily chore came to a halt. Many of the deeply religious Puritan folk who had colonized the state wondered if it was a sign from God.

Fortunately, not all were so easily panicked.

From Our First Century:

The ignorant indulged in vague and wild conjectures as to the cause of the phenomenon; and those profounder minds, even, that could “gauge the heavens and tell the stars,” were about equally at loss for any rational explanation of the event.

It is related that the Connecticut legislature was in session at this time, and that, so great was the darkness, the members became terrified, and thought that the day of judgment had come; a motion was consequently made to adjourn. At this, Mr. [Abraham] Davenport arose and said: “Mr. Speaker—It is either the day of judgment, or it is not. If it is not, there is no need of adjourning. If it is, I desire to be found doing my duty. I move that candles be brought, and we proceed to business.”

The story goes that candles were brought and the legislature continued that day. After word spread of his actions, Davenport became well-regarded around the state for his courage and resolve, eventually serving as Chief Justice for the Court of Common Pleas in Danbury. Ironically, in 1789 while presiding over a case, Davenport was felled by a fatal heart attack, thus meeting his maker while doing his duty, as he apparently had wished.

Another passage from Our First Century:

In New Haven, Conn., there was a shower of rain, with some lightning and thunder, about daybreak in the morning, the rain continuing, with intervals, until after sunrise. The morning was cloudy and darkish; and the sun, rising towards the zenith, gave no increase of light as usual, but, on the contrary, the darkness continued to increase until between eleven and twelve o’clock, at which time there was the greatest obscurity in that place. What little motion of the air there was just at this period, was nearly from the south; though the atmosphere was as calm as the blandest summer morning.

There was something more of a luminous appearance in the horizon, than in the hemisphere in general; also, a most marked liveliness of tine to the grass and other green vegetation; and a very noticeable yellowness in the atmosphere, which made clean silver nearly resemble the color of brass.

At twelve o’clock, noon, the singular obscuration ceased; the greatest darkness, at any particular time, was at least as dense as what is commonly called ‘candlelighting,’ in the evening. In the town of Hartford, and the neighboring villages, the phenomenon was observed with all its distinctive peculiarities; and, by some persons, the disc of the sun was seen, at the time of the greatest deficiency of light.

As it turns out, the darkness was not a sign of God’s displeasure, unless he was sending a roundabout message by smiting forests in Canada.

In 2008, researchers examining tree rings in the Algonquin highlands of southern Ontario discovered evidence of a massive fire that had occurred there in 1780. Great columns of smoke wafted into the upper atmosphere, which affected the sky hundreds of miles away in New England. It’s a phenomena that has also been observed in the wake of large-scale natural disasters such as volcanic eruptions.

So as it turns out, The Dark Day was not The End of Times or a supernatural event. Like many illusions, atmospheric or otherwise, it was just all smoke and … more smoke.

Barnum Back in the Headlines

That’s my birthdate! (well, obviously not the year!).

I never heard of this one. Pretty neat. Happy early bday Yvette.

Wonderful
I think the meaning of “wonderful” has changed over the years. We now think of the word as describing something “wonderfully good”. The original and mpre literal meaning is something that simply causes one to wonder about it, good or bad.